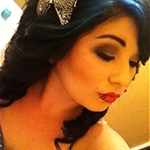 With 1600 hours of professional cosmetology training to boot, Heather has acquired profound and extensive knowledge regarding various facets of hair and skincare chemistry and theory. Heather constantly strives to bring something new to the table while working within the foundational tenets of cosmetology. She has no qualms in experimenting with hair grooming and make up techniques to give the standard fare an innovative spin, and is confident and convincing enough to pull even the most radical looks off.

Currently working as a cosmetologist for Walt Disney World, she does anything and everything needed to make the show go on. From busting airbrush makeup chops to giving touch-up support to various character artists, from putting wigs on equity and hourly actors to punching hair into the silicone of Chewbacca, Heather’s got it all covered. She has even been part of cherished stage productions such as the Little Mermaid, Beauty and the Beast, Alice in Wonderland, Aladdin, Mary Poppins, and the High School Musical and has helped some of your favorite characters come to life through state-of-the-art cosmetology skills.

How to Fade Age Spots Naturally

11 Ways to Remove a Splinter Without Pain: Your Step-by-Step Guide