Did you know a particular genetic factor in certain people makes cilantro taste like soap to them?

So, if someone in your family absolutely hates cilantro, blame it on the genes. For others, cilantro is an herb they just cannot live without. The crunchy and aromatic leaves of cilantro are used heartily as a dressing and a prominent ingredient in Mexican and Asian cuisine.

However, the tender, green leaves can quickly lose their moisture and wilt, even when stored in the refrigerator. On the other hand, exposure to excessive moisture can turn cilantro mushy and promote rotting. Hence, once uprooted, it can be a challenge to maintain just the right environment for cilantro to stay fresh.

As beautiful and tempting it may seem in the farmer’s market, most of us use just one-fourth of what we buy and throw the rest in a plastic bag in the refrigerator. Days later, we find the rotten remains in the bag and end up regretting having bought so much in the first place.

But storing cilantro is fairly simple. If done right, you can store your stock up to 1 year. No kidding!

Cilantro can be frozen in multiple ways to retain its flavor or dehydrated to use as a seasoning. On the other hand, if you want to use its fresh crispy leaves, certain hacks can help extend the shelf life as well.

Here are some useful hacks to store fresh cilantro for up to 1 year.

Note: Always choose the freshest bunch you can find in the market. Also, go for bunches that have dark-colored leaves, as they will be the most crunchy and packed with flavor.

If you wish to store fresh cilantro for months, then freezing is your best bet. While the freezing cold temperature may not be able to hold the crisp texture of cilantro leaves, it will surely preserve the herby flavor.

You can either freeze the bunch whole for 1 to 2 months or freeze the leaves chopped or pureed in an ice cube tray for up to 6 months. 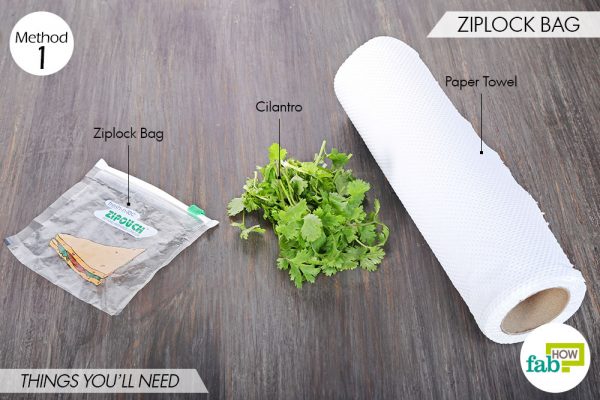 Step 1. Wash the cilantro with warm water & chop off the roots

Step 2. Soak up the excess moisture with a paper towel

Step 3. Seal the cilantro in a ziplock bag & freeze it

To use, simply take some of the cilantro out and reseal the bag. Do not thaw the leaves, as they will turn mushy. Add them directly to your dishes.

Cilantro stored this way should stay good for 1 to 2 months.

If you don’t need to use cilantro as a garnish but rather to enhance the flavor of your dish, you can freeze it whole in oil or puree it and then freeze it in an ice cube tray. Frozen cilantro will stay good for up to 6 months.

When chopped and frozen in olive oil, the oil works as a barrier to protect the cilantro leaves from the cold temperature and blasts of air in the freezer. 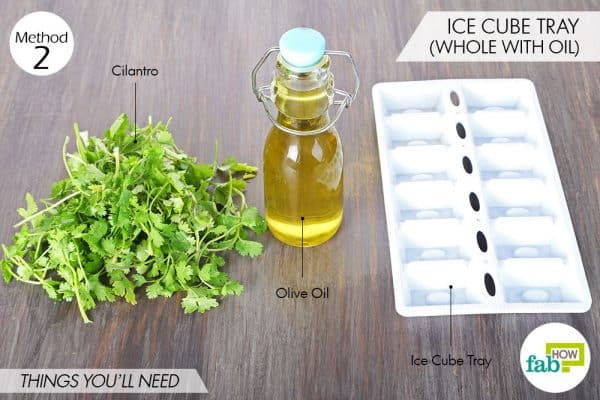 Step 1. Separate the leaves from the sprigs & put them in an ice cube tray

Cilantro stored this way will stay good for 6 months.

Cilantro can also be pureed and then frozen into solid cubes. You can add the cubes directly to your soups and stews for a fresh burst of flavor. 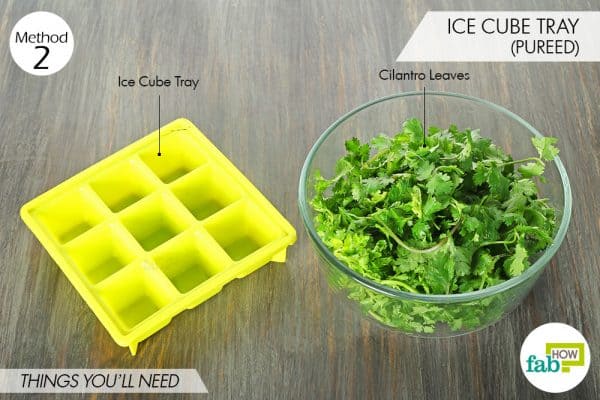 Step 1. Puree the cilantro leaves in a blender

Step 2. Put the puree in the ice cube tray & freeze it

Cilantro stored in pureed form will stay good for up to 6 months.

If you like your cilantro crisp and fresh, it’s best to refrigerate rather than freeze it. However, the shelf life will be much shorter compared to the frozen options. Cilantro stored the correct way in the refrigerator will stay fresh for about 7 to 10 days.

Method 1: Using a Jar of Water

The first way to refrigerate cilantro is to dunk the whole bunch in a jar of water, just like you would keep your cut flowers fresh. In fact, you can also use this method to store mint leaves for up to 3 months. 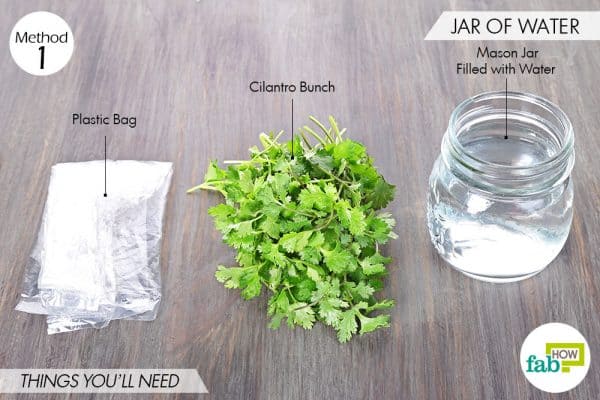 Single-Step Method: Place the cilantro in a water-filled jar & refrigerate it

Simply pluck off fresh cilantro leaves as needed to use in your salads or as a garnish for your dishes. Cilantro stored in water will stay good for 10 days.

You can also use paper towels to preserve celery or even to store broccoli for a year or more. 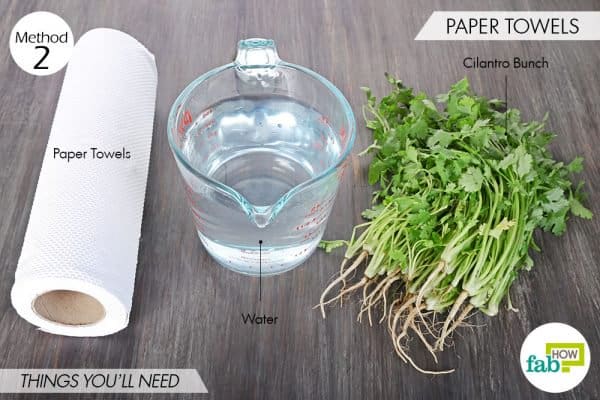 Step 1. Clean the cilantro & chop off the roots

Step 2. Soak up the excess water with paper towels

Step 3. Store the cilantro between paper towels in an airtight container

Cilantro will stay fresh for up to 1 week using this method.

Another way to store fresh cilantro is by dehydrating the leaves. You can then store the leaves whole or grind them into a powdered form to use as a seasoning. Dehydrated cilantro will stay good for up to 1 year when stored in a dark and cool place. 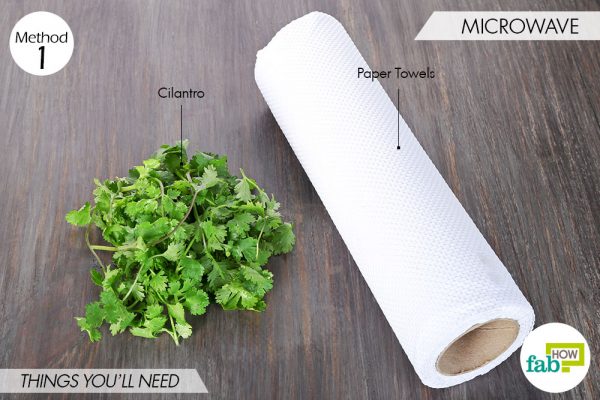 Step 1. Wash the cilantro & soak up the excess moisture

Step 2. Dehydrate the leaves in the microwave & store it in a dark container

Dehydrated cilantro will retain its aroma and flavor for up to 1 year.

How to Deal with Toxic People in Your Life

How to Replace a Broken iPhone 6 Screen