What if someone told you that little brown bottle of first-aid water under your bathroom sink could lighten your hair as well!

Well yes, hydrogen peroxide or the first-aid water (as it is ideally known) could do a lot more than just fizz up and disinfect a wound!

If you’ve ever had your hair dyed in a salon, you may have noticed your colorist using a product that has hydrogen peroxide as its main component, thanks to its bleaching properties. But hey, hair is not the only area you can it on. Being a traditional antiseptic, you can use hydrogen peroxide for skin, teeth, hair and ears.

And if someone told you that these beauty hacks were overlapped by health benefits as well—voila! Not only beauty, hydrogen peroxide is also the only germicidal agent containing water and oxygen, which is an ideal disinfectant.

With its power of oxidation to kill germs and microorganisms and eliminate toxins, hydrogen peroxide is now hailed as the world’s safest all-natural sanitizer.

So, let us have scroll into some of the most amazing ways to use hydrogen peroxide to boost your health and beauty.

Hydrogen peroxide is an effective over-the-counter antiseptic that helps dry out acne breakouts by killing the bacteria on the skin.

Composed of oxygen molecules, hydrogen peroxide helps oxygenate the pores that develop into acne. This creates an aerobic environment in the skin, difficult for the bacteria to thrive in, thus killing them to prevent potential pimples.

Note: Perform a patch test before proceeding with the remedy. In case of severe itching, redness, or burning sensation, stop the treatment right away.

Apply diluted 3% hydrogen peroxide once daily for 1 week to get rid of acne completely.

The 3% solution of hydrogen peroxide is mostly safe on the skin and can be used as a toner to prevent further breakouts.

Method 2: For Earwax Removal and Earache

You can use hydrogen peroxide as a powerful remedy if suffering from earache or struggling to clear out the wax.

The oxygen molecule of peroxide oxidizes the earwax to bubble up and soften, thus letting it out of the ear easily. This attribute of hydrogen peroxide makes it an essential chemical in most formulations for ear problems.

Hydrogen peroxide will clean out your ear in a single use. You can repeat the process for 2 to 3 days if the ear still feels clogged and if the pain persists.

Method 3: As a Mouthwash

For those who spend hours brushing teeth and still are unable to overcome the bad breath, try hydrogen peroxide. 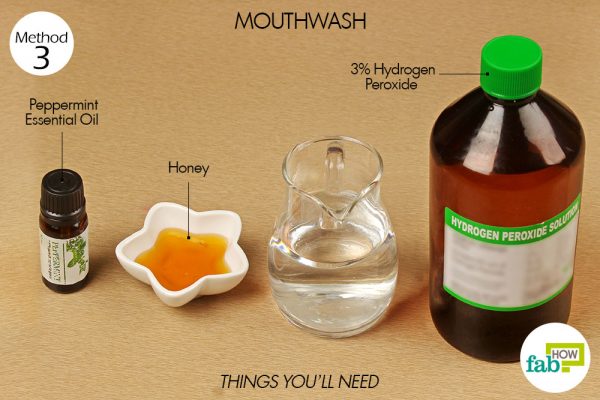 Single-Step Treatment: Combine the ingredients & use as a mouthwash

Store the solution in a dark and cool place. Peroxide breaks down in sunlight to turn into water; therefore, it is advised to store it in a cool and dark place.

Swish and gargle your mouth with this homemade mouthwash once every day.

For more inculcating aroma and benefits, you can blend in 2 to 3 drops of any other preferred essential oil.

Thanks to the antifungal properties, hydrogen peroxide works as a powerful antidote.

The presence of hydrogen and oxygen molecules makes it ideal for killing off fungus and bacteria from the skin. Hydrogen peroxide releases oxygen bubbles that create an aerobic environment, which makes it difficult for the anaerobic bacteria to thrive in, thus ultimately killing them.

Repeat once or twice a day, especially before going to bed at night, for a couple of months.

Alternatively, for toenail fungus, you can prepare a foot soak with similar ingredients in the ratio of 1:1, and soak the affected feet in the solution for 20 to 30 minutes.

It also prevents the infection from recurring and promotes better healing.

Single-Step Treatment: Use diluted hydrogen peroxide as a mouth rinse

Use hydrogen peroxide remedy 3 times a day for 1 or 2 days or until the canker sores heal completely.

Method 6: For Treatment of Scabies

Using hydrogen peroxide in combination with borax works effectively to deal with scabies outbreak on the skin.

While hydrogen peroxide is an effective bactericidal, borax works as an efficient insecticide and fungicide to kill itch-causing mites that lead to scabies. The combination works great to prevent the infection and reduce itchy rashes and inflammation. 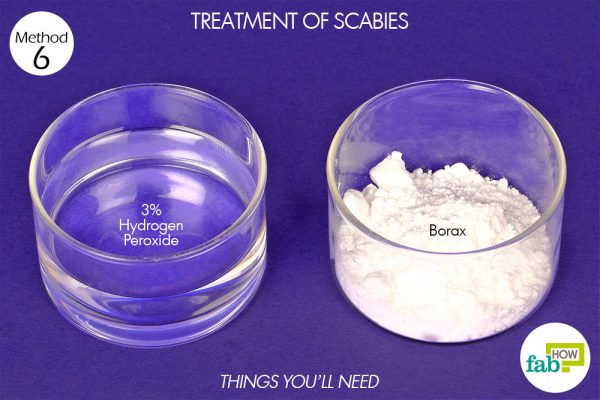 Use the mixture 2 times daily for 2 weeks to get rid of scabies.

If you’ve ever had your hair bleached in a salon, chances are your colorist used hydrogen-peroxide bleach. A natural bleach, hydrogen peroxide is one effective home remedy for dyeing and lifting the color of your strands to your own liking. It is in fact for this reason, hydrogen peroxide-bleached hair is also called peroxide blonde.

A mix of baking soda and hydrogen peroxide is a powerful and instant remedy for lightening your hair.

Note: Before proceeding with the hair lightening technique, we recommend you to perform a strand test. This will help you ensure that you like the color and if it is not too damaging to your hair. 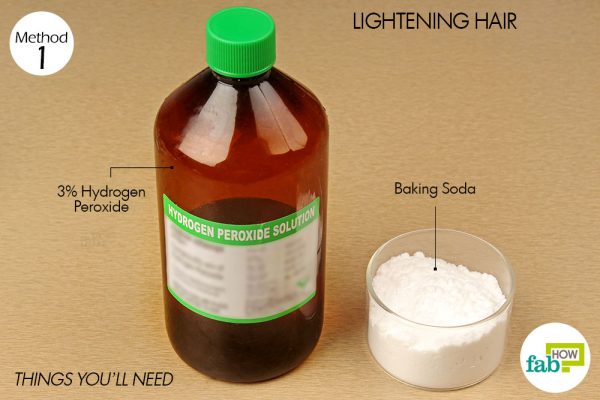 Step 1. Mix hydrogen peroxide with baking soda in a bowl

Step 2. Apply the paste on your hair for lightening the color

Hydrogen peroxide is a bleaching agent and thus works charm in most teeth-whitening products.

Baking soda, a natural abrasive, is another effective teeth-whitening ingredient that prevents discoloration, removes plaque, and works best for surface stains on teeth.

A combination of hydrogen peroxide with baking soda releases free radicals that help break up the stain molecules on the surface of the teeth and thus works effectively to naturally whiten your teeth.

Note: To limit the risk of teeth sensitivity, it is strictly advised to use 3% hydrogen peroxide solution in the remedy as opposed to the 10% solution used in some commercial toothpaste. 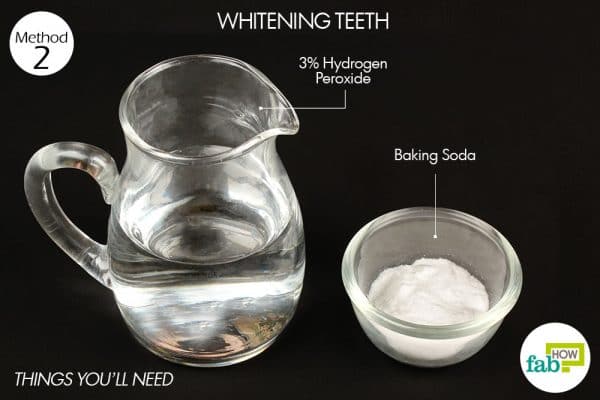 Follow this remedy 2 times a week for up to 10 weeks to get good results.

Note: If the paste feels too harsh for your teeth and gums, dilute the hydrogen peroxide with an equal amount of water before mixing it with baking soda.

It may happen to you some time that you wear some nail color and at the time you want to take it off, the pesky stuff doesn’t just come off! Hydrogen peroxide is one quick and simple way to make your nails look squeaky clean and shiny.

Mixing hydrogen peroxide with baking soda creates an effective scrub for removing stains from the nails and imparting a shiny look. 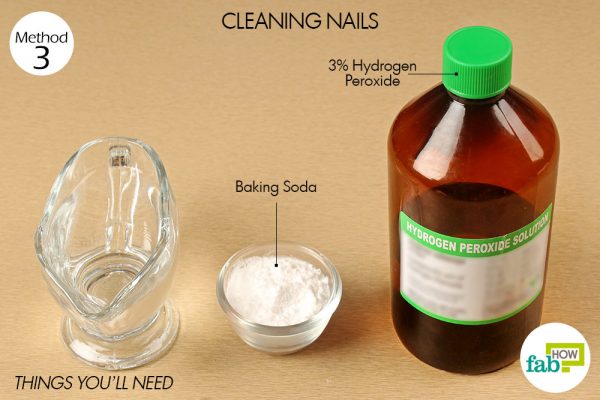 Step 1. Put hydrogen peroxide and baking soda in a bowl

Step 2. Scrub the paste over your nails

Step 3. Soak your nails in clear water for 5 to 10 minutes

Scrubbing your nails with baking soda and hydrogen peroxide paste will give immediate results.

Note: Do not use this remedy more than once a month, as both ingredients are powerful and can turn your nails brittle if overused.

If you are sick or feeling tired, give your bathwater a detoxifying boost for a refreshing experience that will also clear you off all toxins and germs from your body.

Oxygen detox bath is specifically helpful in this case. The oxygen molecule from hydrogen peroxide helps eliminate toxins from the body while also creating an aerobic environment that makes it difficult for the free radicals and toxins to flourish.

Adding ginger to an oxy-detox bath works charm. An anti-inflammatory and healing agent, ginger is specifically helpful in times of illness as it clears off congestion to alleviate body aches, allergies, and any kind of irritation. 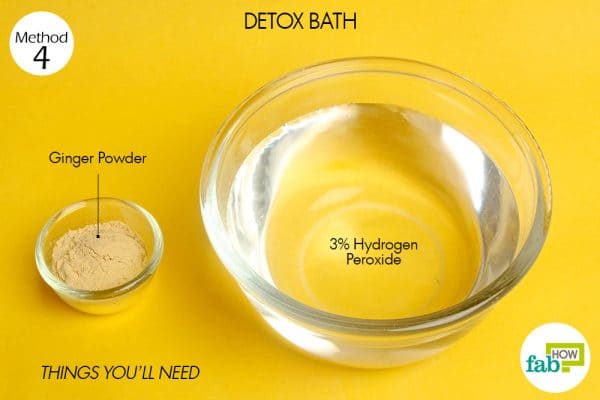 Prepare and soak in the detox bath water once or twice a week.

Method 5: For Blackheads and Whitehead Removal

You can also use hydrogen peroxide as an effective treatment for blackheads and whiteheads on your skin.

Blackheads and whiteheads mostly occur when the skin gets clogged with oil. This is where hydrogen peroxide proves effective. It dissolves the blackheads to eliminate them from your skin.

Follow the activity 2 times every week for up to 2 weeks to observe satisfactory results.

Often, your make up brushes may look clean, but the bristles are porous and harbor several oils and bacteria that may harm your skin.

With each use, the makeup brushes pick up dead cells and bacteria from your face. These bacteria multiply overtime to cause acne and breakouts on the skin.

Hydrogen peroxide as an antibacterial helps kill off this bacteria harboring on the brushes that often goes unnoticed. Adding organic baby shampoo or castile soap to the solution adds an ample amount of olive oil to the bristles of the brushes, thus making them softer on your skin and cleaning them better. 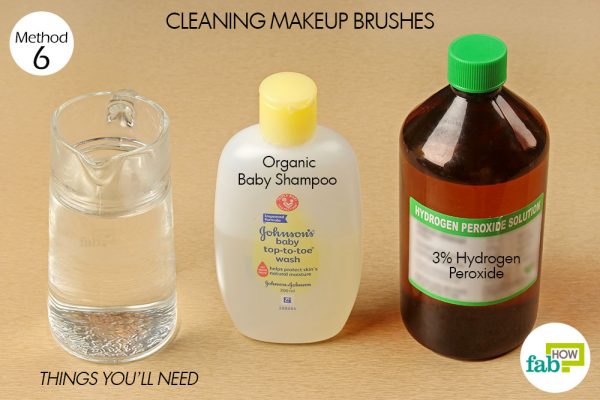 Step 1. Combine the ingredients to form a soapy solution

Step 2. Soak the brushes in the solution for 10 minutes

Step 3. Rinse and wipe to remove any extra moisture

How to Make Your Own Sunscreen at Home