How many times have you had one-to-one combat with a jar, struggling to open a stuck lid that just refuses to give up no matter how hard you try?

From applying heavy muscle power, to pleading it to open by itself, to having thoughts of breaking the jar just to get into it, to finally giving up – the stuck lid has seen and heard it all.

Most of the time, the jar cannot be opened because your hands are too slippery and you don’t have a proper grip over the lid.

Other times, the lid gets stuck because the air pressure inside the jar is less than that of the outside air. This creates an air vacuum inside the jar causing it not to open up swiftly. This usually happens with a new jar, because the air is partially vacuumed for securing the food contents so that they don’t turn stale. 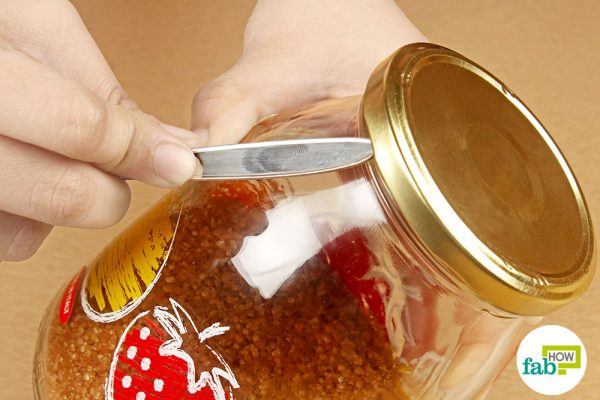 And then there are those times when some food particles are blocking the way, stuck between the jar’s glass threads and the lid.

But there’s no reason to be worried. The lid might be stubborn, but you’ve got all the brains.

Next time there’s a fight between you and the lid of a jar, these simple techniques will make it a one-sided fight and help you win without applying much muscle power. Why? Because it’s science!!

Here are six methods that will help you open your stuck jar lid. Most can be easily opened by using one of the first two methods. But if the lid is too stubborn and still stuck, move on to the other techniques to open it with ease.

In many cases, all you need is a pair of rubber gloves to open the jar. Use the ones that you wear to wash dishes or clean the house.

Step 1. Wear gloves on both hands 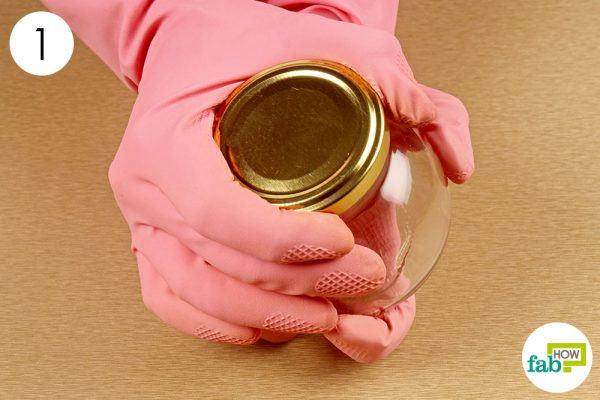 A rubber glove gives you a better grip over the lid that would otherwise slip out of your bare hands. Adding a little friction to the lid will make it less slippery and help you open up the jar pretty easily.

Furthermore, wearing rubber gloves on both hands will ensure that not only the lid is in a good grasp, but the jar is secured, too. 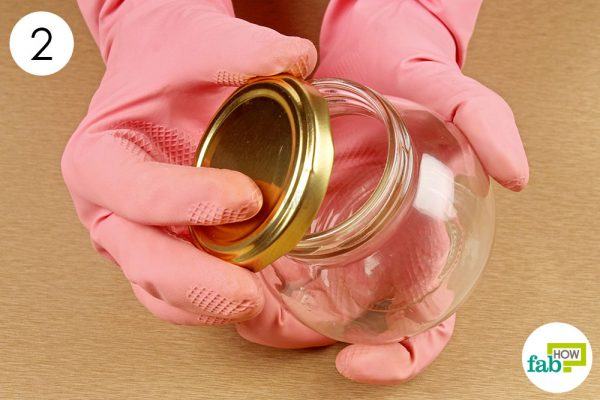 Just twist the lid and the jar is opened. It’s as simple as it sounds.

Don’t have rubber gloves? Don’t worry. Rubber bands will do the trick, too.

Step 1. Place a rubber band around the lid 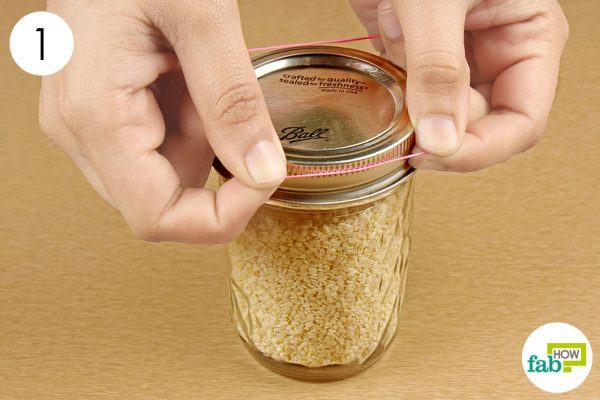 Just place a rubber band (or two for a better grip) around the lid of the jar. This time, even though your hands are bare, the anti-slippery property of rubber bands makes it easy to get a good grip around the lid and not let it slip away. 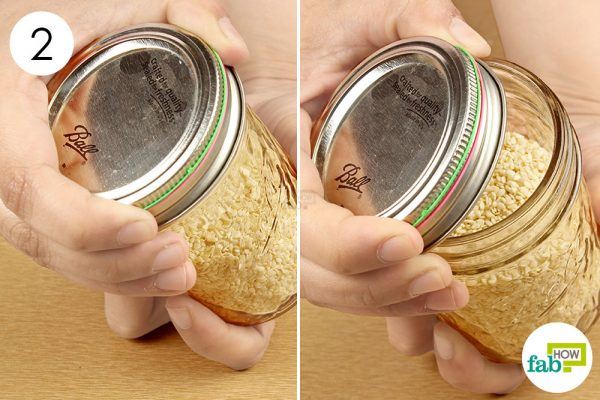 Now, try and open the jar by the same twisting method you’ve been using for years. Voilà!

Spoon the lid off of the jar by following this simple procedure.

Step 1. Angle the spoon handle under the edge of the lid and apply pressure 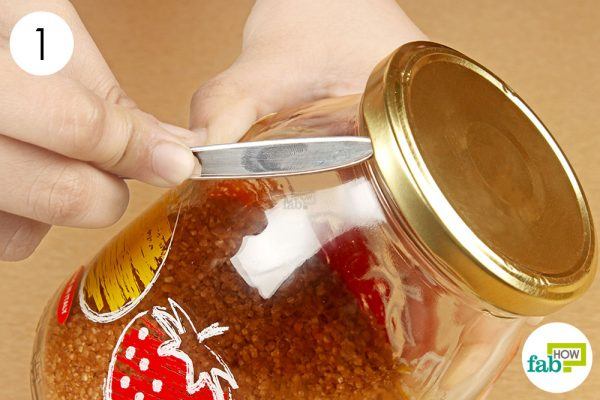 All you need to do now is exert a little pressure to the lever, i.e., the handle of the spoon, and push it toward the jar. By doing this, you’ll be breaking the airtight seal of the jar. This will be accompanied by a popping sound.

Get a firm grasp on the jar with your non-dominant hand, as your dominant hand will be used to apply pressure on the lid with the spoon.

Step 2. Twist and open the lid 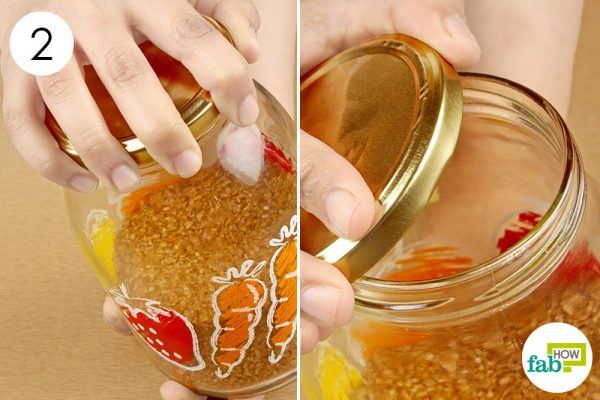 Once the seal is broken, opening the lid is child’s play. Simply twist the lid to open the jar.

You can also use a handheld can opener for this purpose.

This method of inverting a jar into hot water is proven quite effective for opening a stuck lid. It is especially helpful if you are unable or prefer not to work at it with some muscle.

Metal has a higher thermal expansion coefficient than glass, hence the metal lid expands a little when heated. Once the metal expands even a little, it lets out the inside air pressure and breaks the seal.

Inverting the jar also works as the food inside the jar pushes against the lid, further reducing the pressure inside. 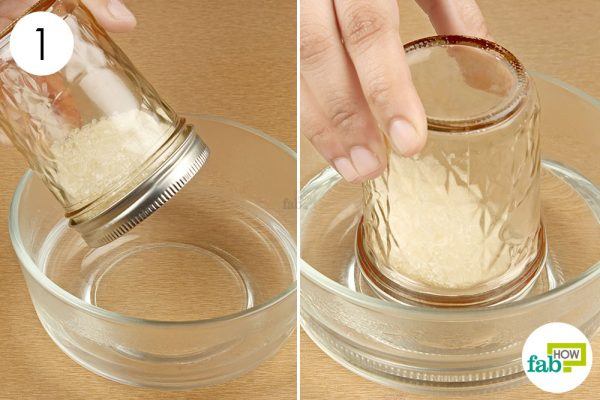 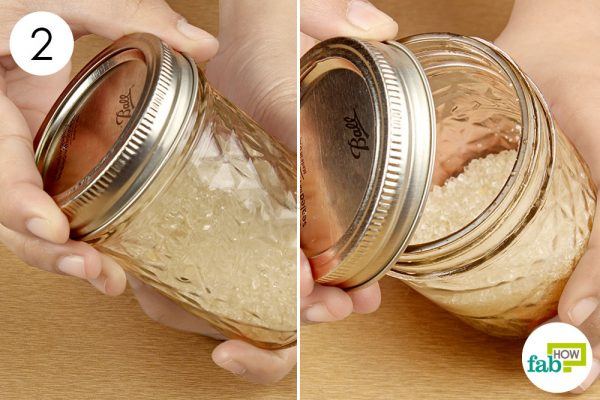 Opening the lid off a jar by pouring hot water on the center of the lid is another effective method.

Directing the hot water at the center of the lid heats the metal more than the glass, so you get a greater difference in the expansion of the lid and the jar. The heat spreads rapidly and quickly around the edges of the lid, making it loosen up and come right off.

Step 1. Pour hot water on the center of the lid 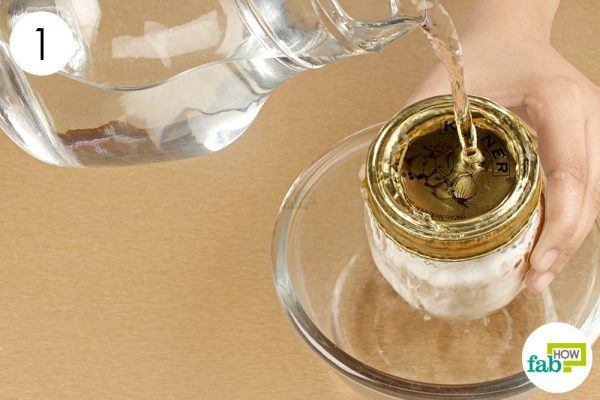 Note: Be very careful while pouring the hot water to avoid burning your skin. 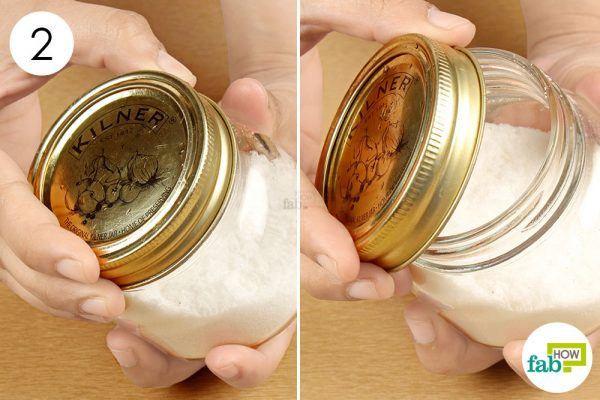 A little tap here and there, and the jar is opened.

This simple yet effective technique works to release an air pressure seal as well as when the cause of the problem is food particles that are keeping the lid stuck to the jar. Tapping will move the food particles out of place, thus loosening the lid. 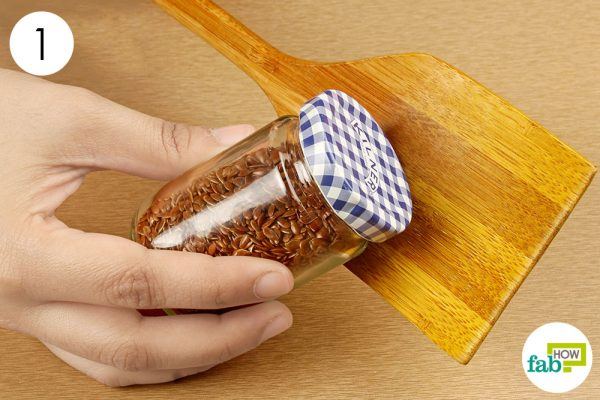 Tap the lid of the jar around the edges using a spatula, a spoon or any other hard surface to release the air pressure. This may deform the lid a little bit.

Do not tap the lid too hard as it may cause the lid to get stuck even more. 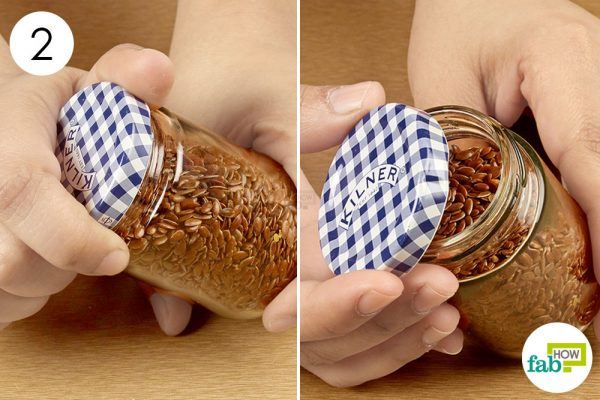 Apply a little pressure to twist the lid, and pop it goes. Open the jar.

Seal the lid of the jar with the duct tape to unseal it and watch it come loose in a jiffy.

Single-Step Method: Wrap the duct tape around the lid and pull the tape 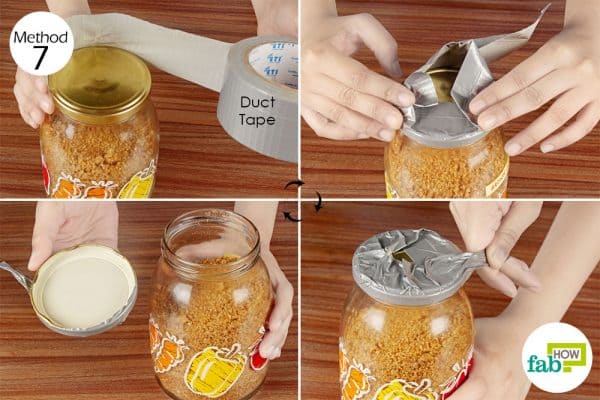 If the lid refuses to budge, you can use multiple layers of duct tape to firm the grip.

How to Clean and Shine your Microwave

8 Reasons People Give for Not Reading Books