Even if you aren’t a health nut, it is hard to dislike the sweet taste of fresh coconut. Those of you who’ve had it don’t need convincing, while those of you who haven’t need to buy one as soon as possible.

The nutritional value of coconut is off the charts, too. A mature coconut is high in fiber, vitamins and healthy fats.

Coconut helps remove cholesterol from your blood, improve your metabolism and digestion, and reduce neurological disorders. You may have even heard reports that coconut water was used as an IV drip in WWII for emergency plasma transfusion.

There’s just the one little thing of removing the coconut shell that can give you a hard time. It can be a real turn off if you don’t know how to easily crack open the shell and remove the flesh.

Well, it's no rocket science. The tricky part is just removing the inner flesh that is stuck to the hard shell.

What if you were to learn that not only can you easily remove a coconut’s hard shell, but there are also ways to get the complete coconut flesh intact? It is definitely worth a try.

Method 1: Using a Hammer and Knife 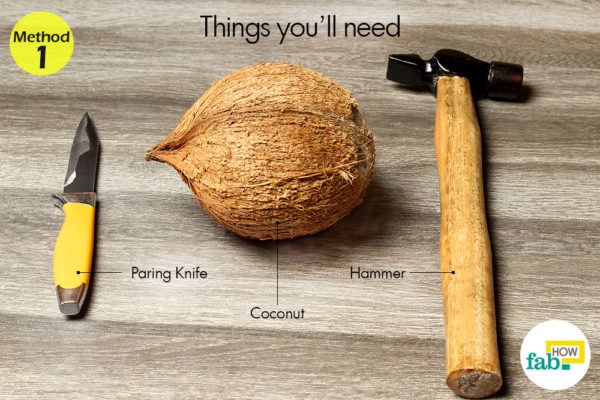 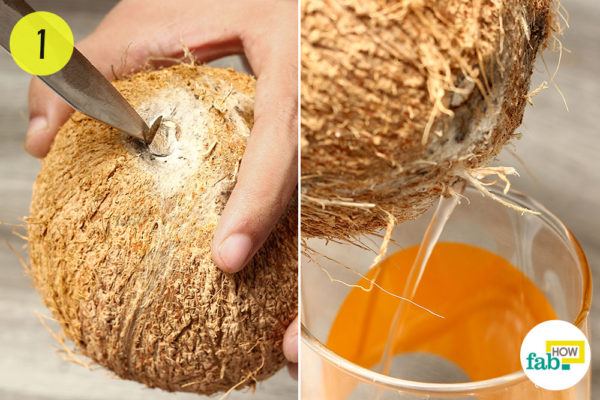 Before opening the coconut, use your paring knife to easily cut through one eye of the coconut to reveal the flesh inside. Make a hole to drain the water into a glass.

Out of the three eyes in the coconut, one is softer than the others and can be easily punctured with a sharp object. You need to find that soft eye.

Step 2. Hit the coconut all around the middle 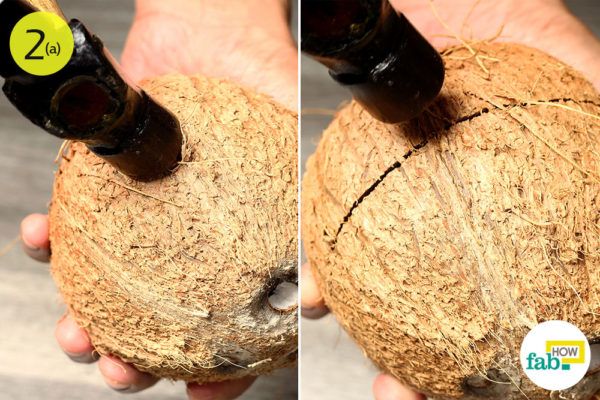 Hit the coconut with the hammer in the middle (at the bulge) and keep rotating it so the blows land equally all along its center. It is like hitting the earth all along its equator.

You will see cracks developing on it and eventually it will break into two pieces. 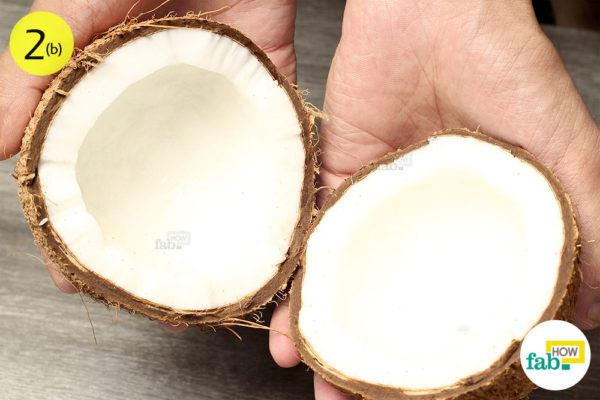 Alternatively, you can use the back side of a cleaver or a chef’s knife to strike the shell.

Step 3. Remove the flesh from the shell 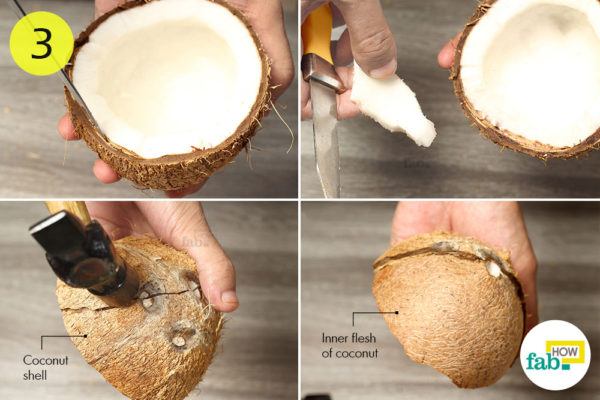 Now, if you are comfortable using a paring knife to remove the flesh from the shell, then go ahead.

For those of you looking for an easier process, pick up a piece of shell that has the flesh still attached and hit the back of the shell with the hammer. You will have your flesh out in no time. Way easier than trying to remove it with a knife (unless you are more comfortable with the knife). 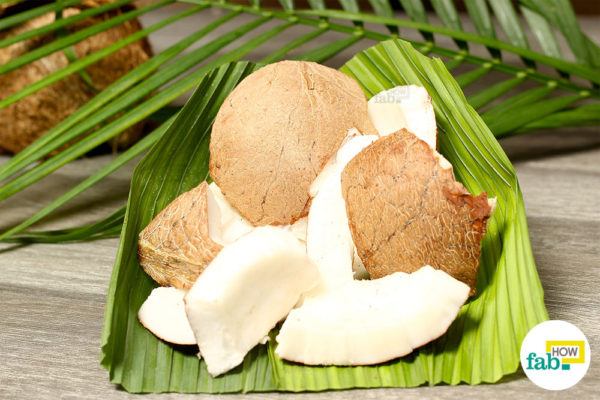 Method 2: Heating in an Oven 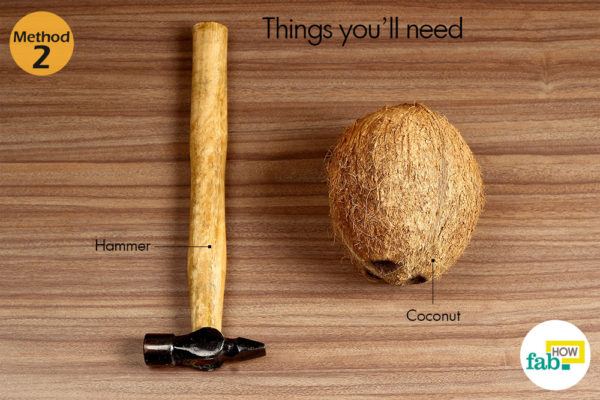 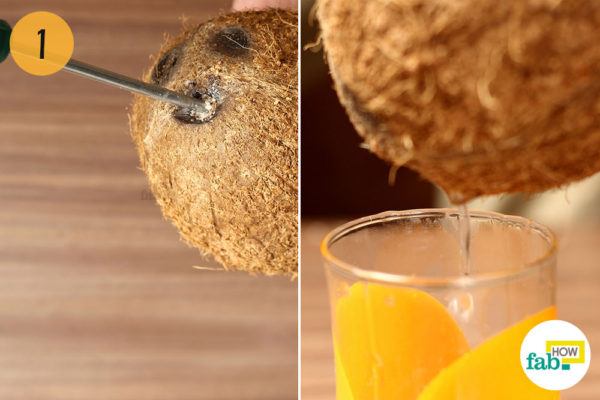 Before you heat the coconut, use a thin screwdriver or an ice pick to puncture the coconut’s soft eye and drain its water into a glass.

Step 2. Heat the coconut in the oven 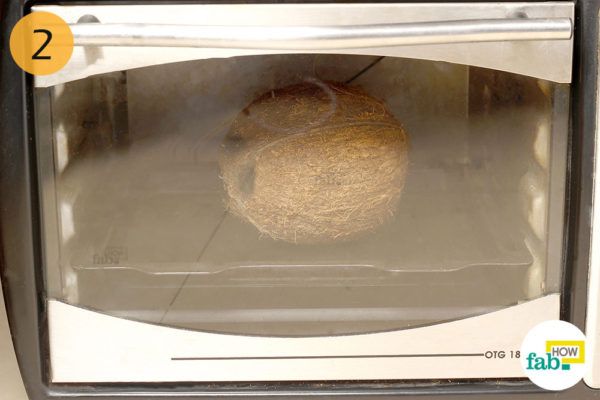 Step 3. Take the coconut out of the oven 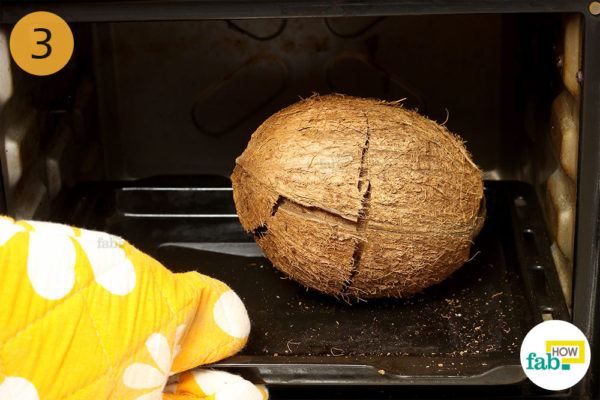 Carefully remove the coconut from the oven after 15 minutes. You will see that much of the coconut will have cracked already.

Be careful while removing the coconut, as a few drops of coconut water might ooze out of the punctured eye. 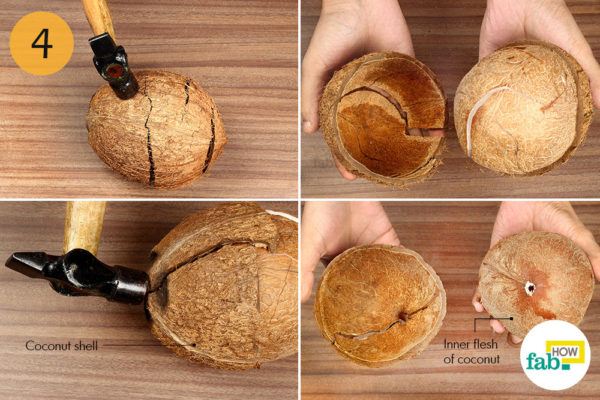 Hit the coconut shell all around with the hammer, removing the shell as it becomes loose. In most cases, your shell will crack open into two or three pieces, giving you the inner flesh intact. 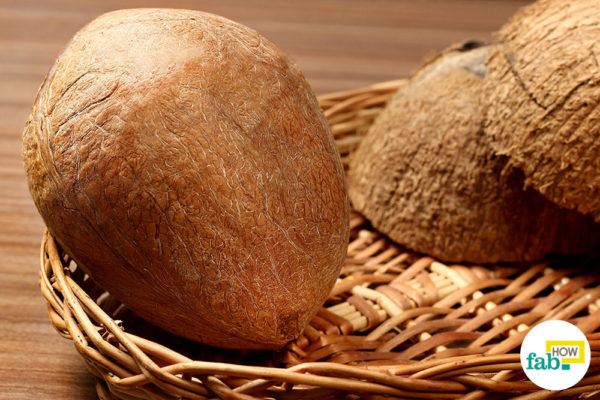 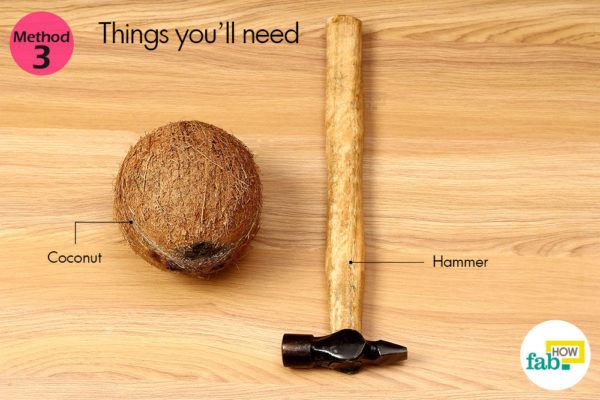 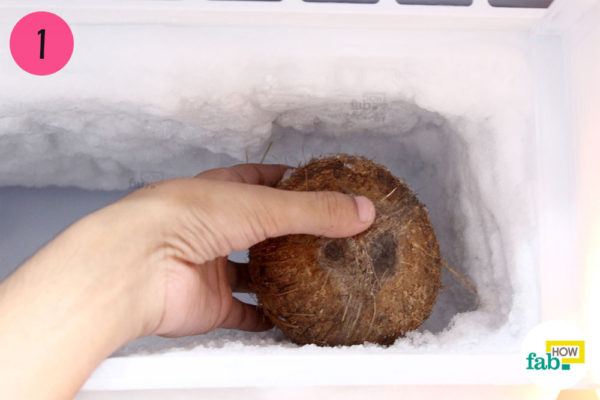 Step 2. Remove the coconut from the freezer 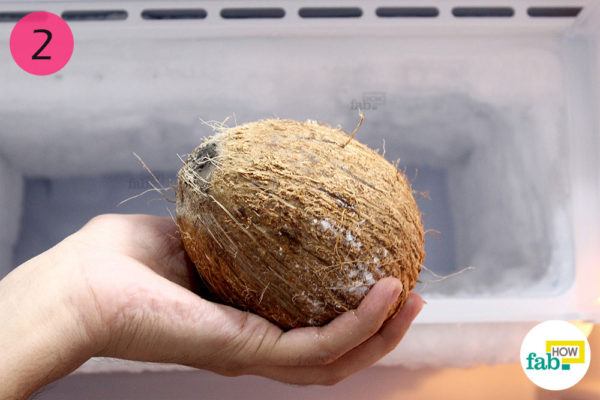 After 12 hours, remove the coconut from the freezer. 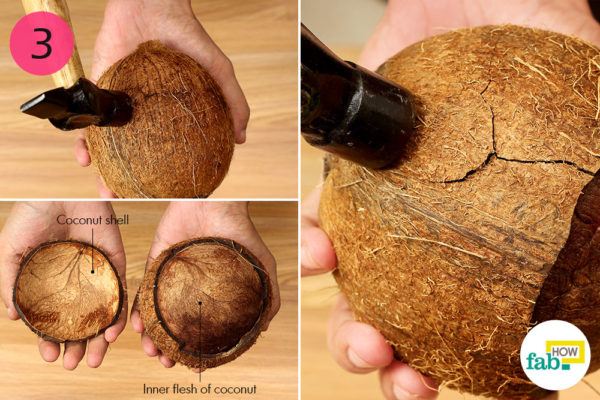 Since the coconut is frozen, the shell will be really hard. This process will take a bit more time than others, but the results will be rewarding.

Hit the coconut shell in a circular manner. Here, instead of hitting it in the middle, hit the coconut a bit above and below the center.

In a minute, you will have your intact coconut. 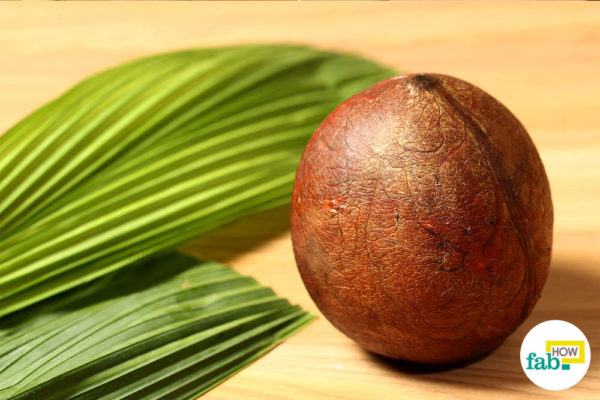 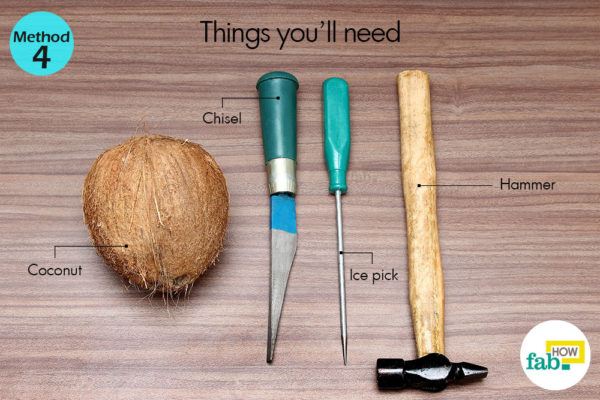 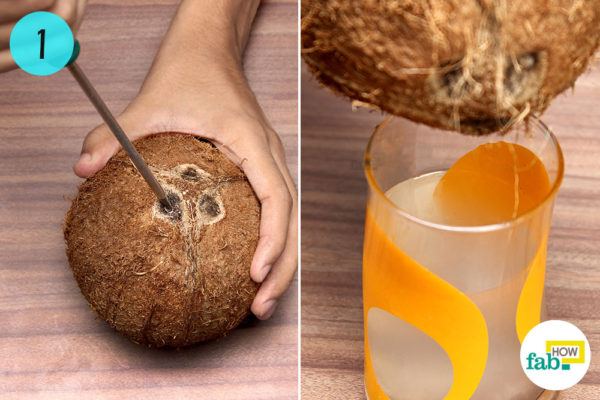 Before opening the coconut, use your ice pick or Phillips screwdriver to make a hole in the coconut’s soft eye and drain its water into a glass.

Step 2. Remove the bottom of the coconut 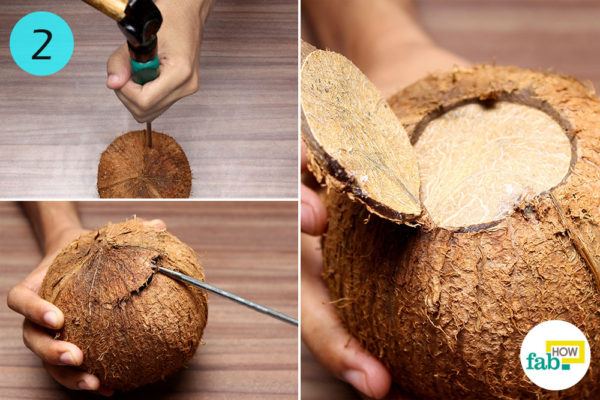 Place an ice pick or a thin Phillips screwdriver near the bottom of the coconut (where there are no eyes). That is, if it were the earth, you’d have to place it at one point in the Antarctic Circle.

Hammer the ice pick into the shell. When it has penetrated a quarter inch, use it like a lever to open the bottom cap.

Step 3. Remove the rest of the shell 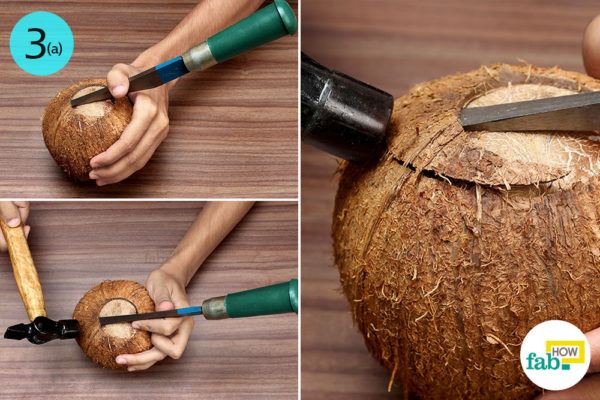 Place the thin edge of the chisel (or flat-head screwdriver) in between the flesh and the inner side of the shell. 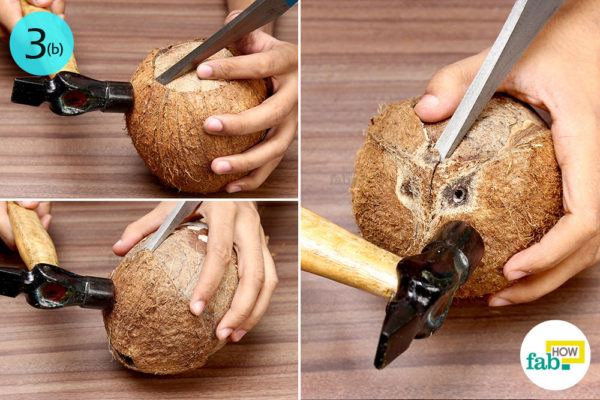 Where your chisel is stuck between the flesh and the shell, use the hammer to hit the outside of the shell on either side of the chisel. Cracks will develop and a part of the shell will come off soon enough.

Continue the process to remove the entire shell and get the coconut flesh intact. 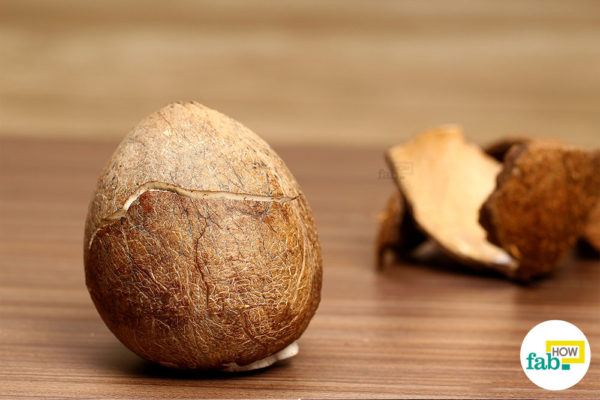 How to Get Rid of Rust on Iron

How to Make Scrambled Eggs