Dull scissors can be peskier than your everyday housefly. Being interrupted in any task by a pair of dull scissors that refuses to deliver is irritating on multiple levels. Replacing dull scissors with a new pair is not a solution – at least not a great one.

Even if you’re not a do-it-yourselfer, a cook or a craftsperson, chances are that you still regularly use your scissors. Around the house, scissors have innumerable uses that can’t be easily documented.

Purchasing a new pair of scissors every time the old pair gets dull is extremely wasteful, but that is exactly the practice promoted by the prevalent commercialization in today’s society.

A pair of scissors is one of those household articles that prove useful over the years if provided with a little care. Fortunately, with only a little time and effort, you can easily sharpen your scissors at home.

Before moving on to the methods given in this article, you can also watch this video to learn how to sharpen a pair of scissors in just 3 minutes. 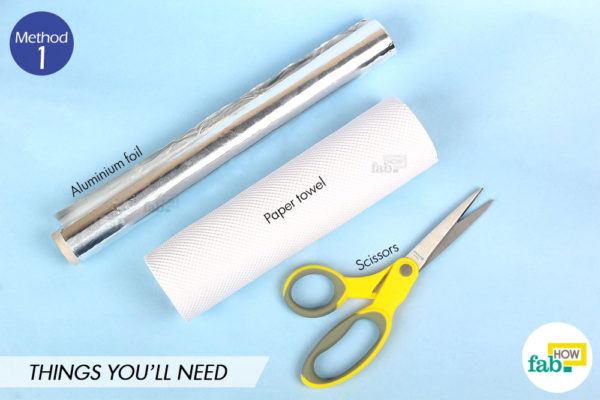 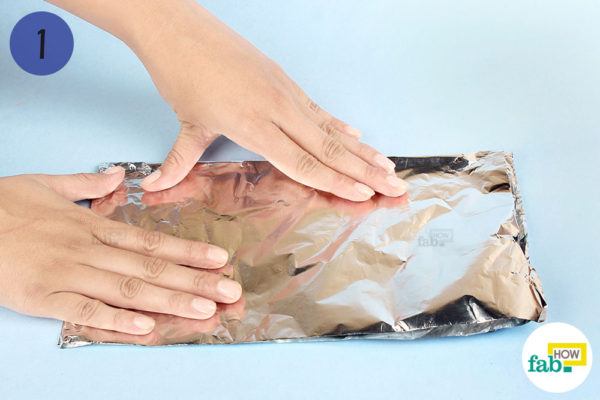 Step 2. Use the scissors to cut the folded foil into long strips 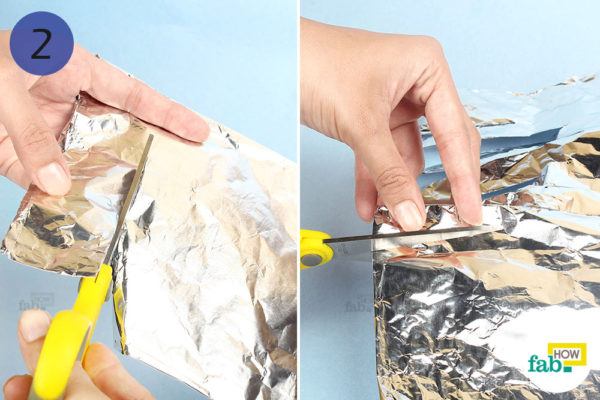 Now, cut the folded piece of foil into long strips with the scissors. Be sure to cut in full strokes, so that the entire length of the blades gets sharpened.

Repeat a couple of times before checking the sharpness. Continue with the process until the scissors become sharp. 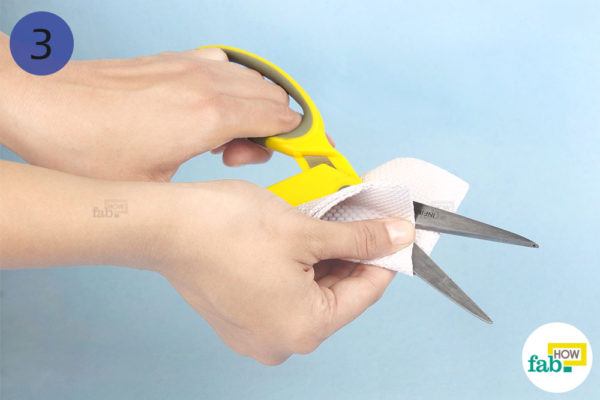 Wet a paper towel with a little warm water. Wipe down the blades of the scissors with the damp paper towel to remove the aluminum grit. 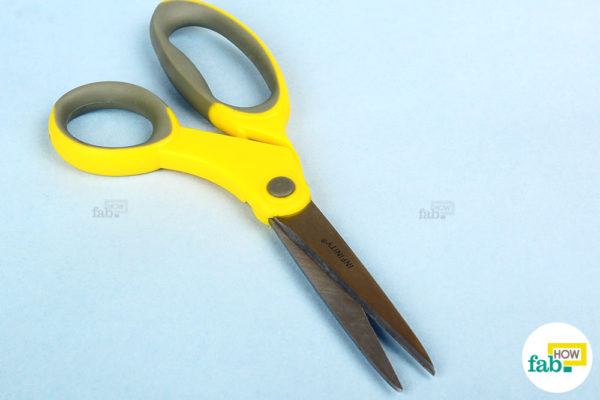 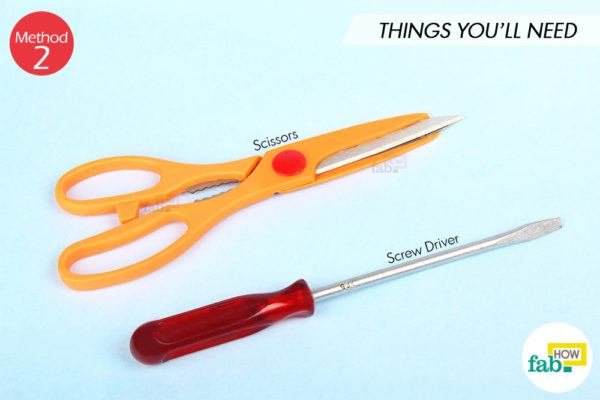 Step 1. Attempt to “cut” the shaft of the screwdriver with the scissors 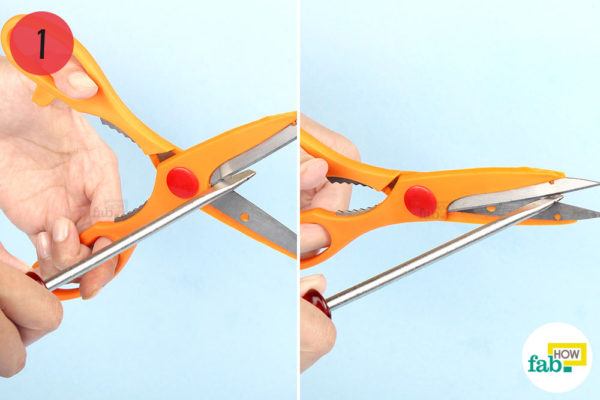 Open the scissors wide and align the metal shaft of a screwdriver between the blades, near their base.

Now, close the scissors around the shaft as if to “cut” it. Drag the entire length of the blades across the shaft in the process.

Repeat about 10 times, then test the sharpness of the scissors. Keep on with the process until the scissors are sharpened to your preference.

Needless to say, this method will only work if the screwdriver’s shaft is made of metal. 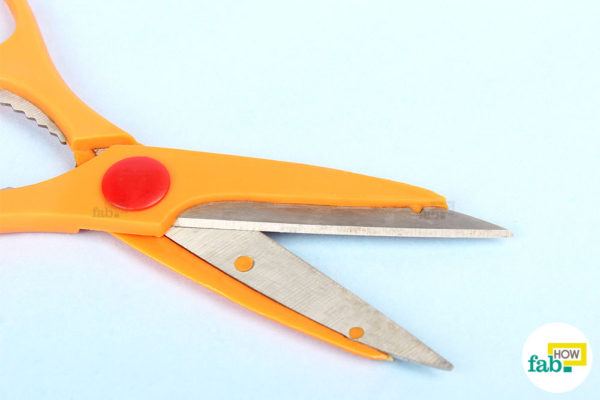 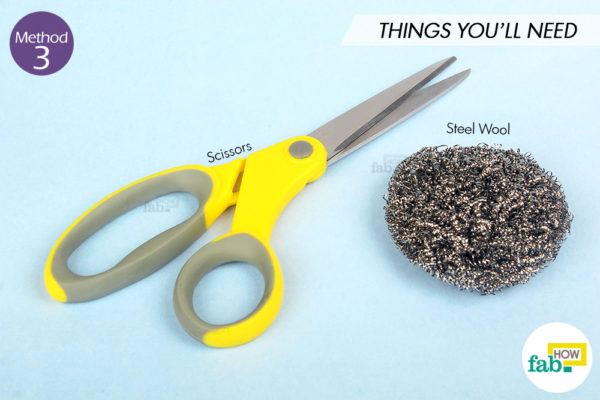 Step 1.Use the scissors to cut steel wool into strips 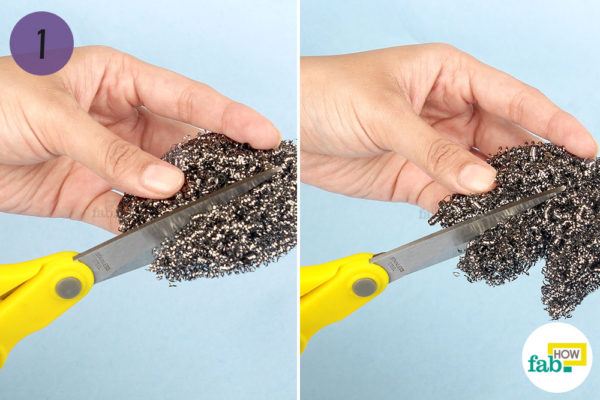 Get your hands on a piece of steel wool, the kind you use for scrubbing and cleaning. Simply cut the steel wool into strips using the dull blades of your scissors. Ensure that you work the entire length of the blades while cutting the steel wool.

Cut the steel wool about 10 times before testing the sharpness. Repeat if necessary. This method will easily touch up the sharpness of your scissors. 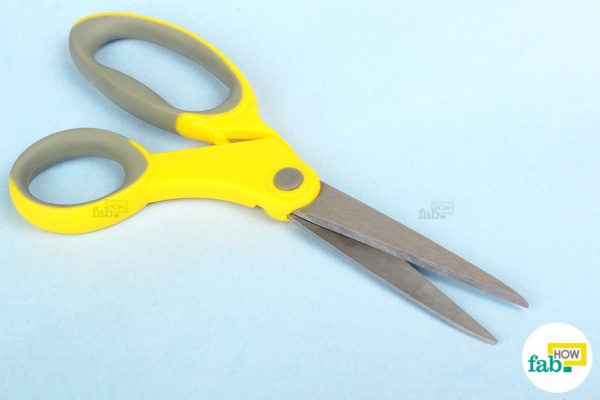 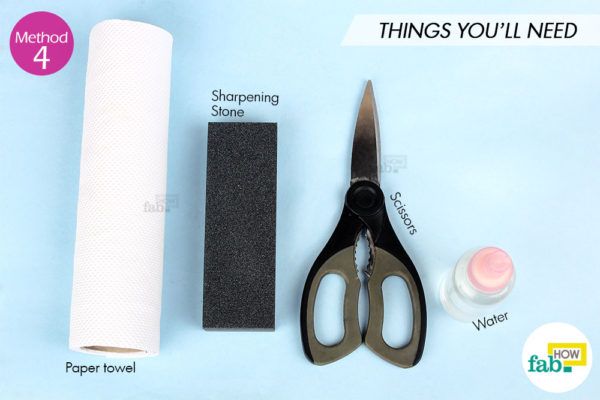 Step 1. Take the blades of the scissors apart 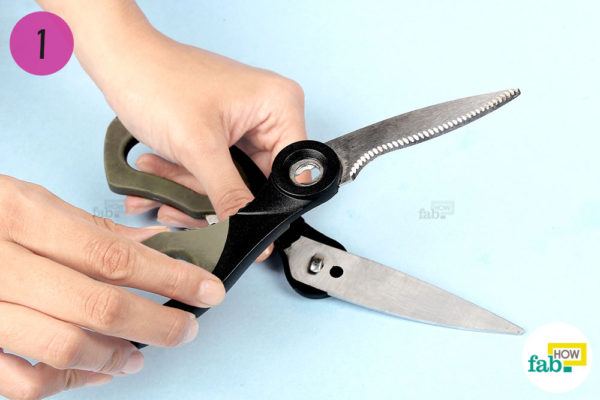 To sharpen the scissors on a sharpening stone, you’ll need to take them apart. Unscrew the blades and separate them. 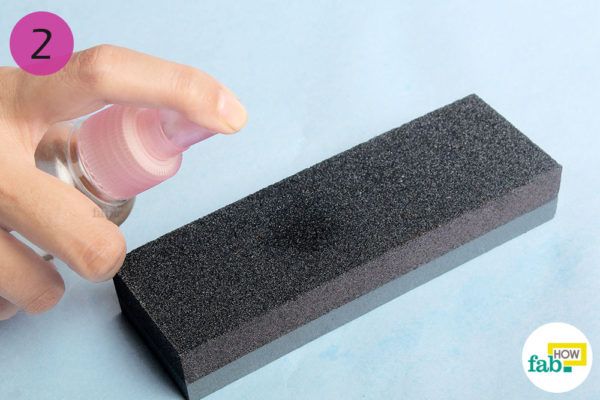 Spray a little water on the sharpening stone to lubricate it. Lubricate the side that you’ll be using. If you simply wish to touch up the blades, you can use the side of the stone with fine grit. But if your scissors are absolutely dull, you should start with the side having the coarser grit.

You may also use a little oil as lubrication. While some hardware stores sell “honing oils” for this purpose, any sort of oil or a little water can do the trick. 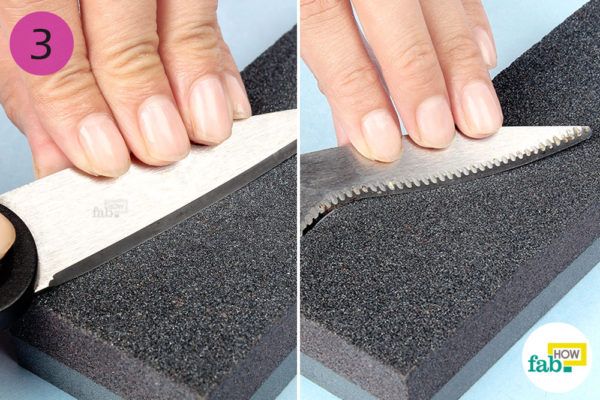 Lay the blade on the stone. The inner side of the blade, which comes in contact with the material being cut, should face the stone. Grip the blade firmly by the handle and balance it with your other hand.

Move the blade at an angle toward you, keeping the edge of the blade flat against the stone. Repeat the strokes 10 to 20 times in the same direction to sharpen the blade completely.

Repeat the process with the other blade.

After working the blades on the coarser grit, finish the process by giving each blade a couple of pulls on the side with fine grit.

Step 4. Assemble and clean the blades of the scissor 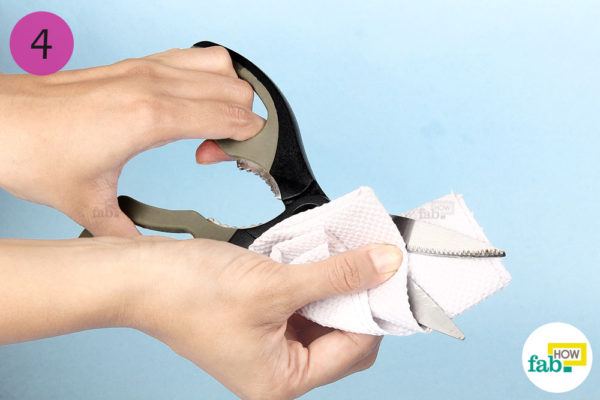 Screw the sharpened blades back together. Open and close the scissors a few times. This will remove the burrs or slivers of metal on the edge of the blades that form during the sharpening process.

Clean the blades with a dampened paper towel to remove metal dust and debris. 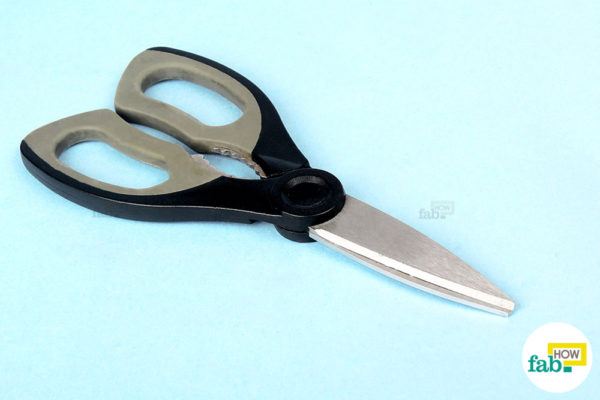 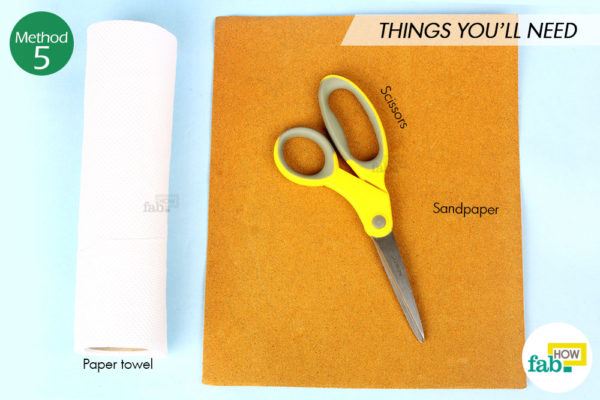 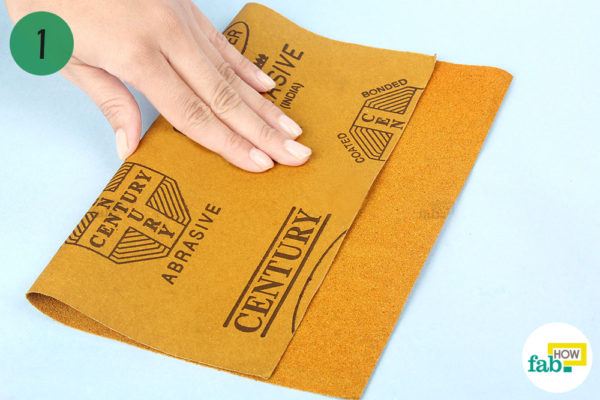 Fold the sandpaper with its rough side facing out. This will help sharpen both blades with each stroke.

Use a fine grit sandpaper (about 150-200 grit) for this process. This will provide a finer finish.

Step 2. Use the scissors to cut the sandpaper into long strips 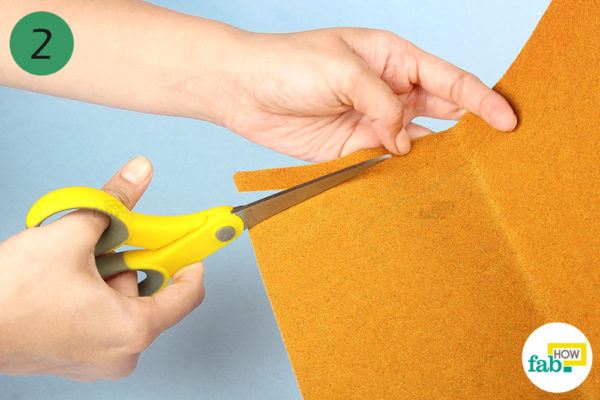 Cut the sandpaper into long strips with the dull blades of your scissors. Make sure that you use long strokes while cutting to ensure the entire length of the blades come in contact with the gritty paper.

Repeat 10 to 20 times before testing the sharpness of the scissors. Continue the process if needed. 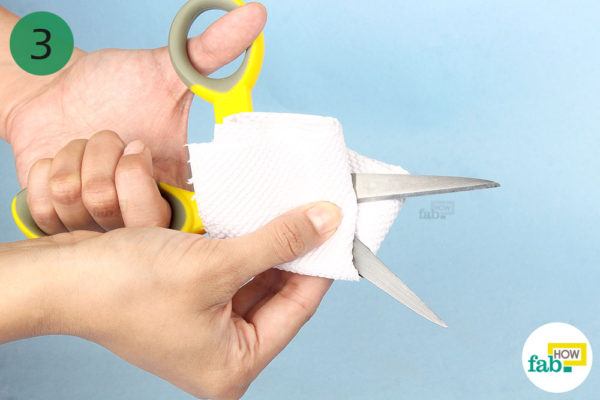 Dampen a paper towel with a little warm water. Wipe down the blades of the scissors to remove the sandpaper debris collected on the blades. 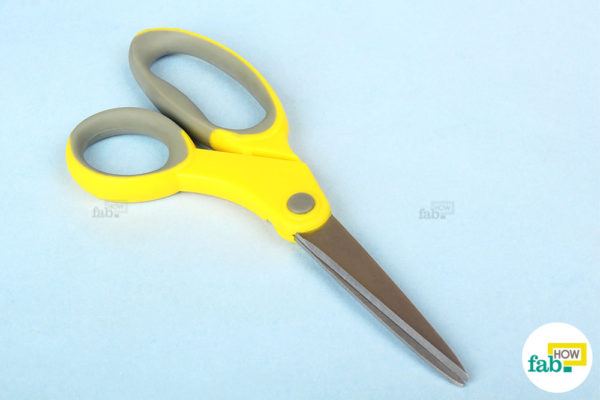 Summary of How to Sharpen Your Scissors with Aluminum Foil:

How to Make Perfectly Crispy Hash Browns at Home