Making mistakes is part of being human. Everyone commits them from time to time. Whether the mistake is entirely your fault or you just had a small role in the entire conflict, an apology is in order.

In certain circumstances, a mere “I’m sorry” will work. But many times, a sincere and restorative apology is needed.

An apology can either help resolve the matter and reconcile hurt feelings, or it can make things worse for you.

There are a million ways to apologize, but not all apologies are equally effective. Ideally, a meaningful and sincere apology should include an acknowledgment of what happened, expression of regret and a commitment to make reparations. (3)

Although delivering an effective apology is not rocket science, many apologies lack even a basic level of what is needed to mend the rift. This can happen for many possible reasons; for example, a belief that an apology won’t be enough to repair the damage, or that the offender may simply not know how to apologize. (2)

Here are some steps to make an apology the right way: 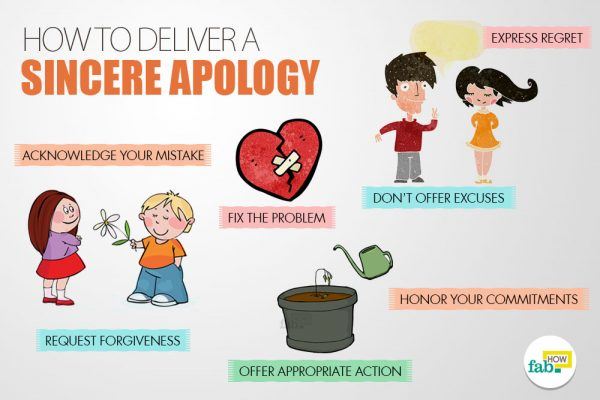 1. Ask for permission to apologize

Sometimes after an argument, the person may need some time to collect his thoughts and calm down. So, asking for permission to apologize can come right away or after the person has cooled down.

They may highly appreciate that you are seeking permission to apologize and not jumping right in. When they permit you, let them know what you are apologizing for. 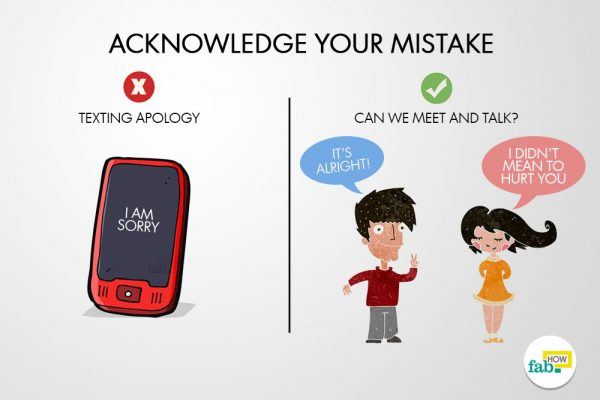 The first step to offer a sincere apology starts with acknowledging your mistake. This is an essential part of the apology, as people want to know you will not repeat the mistake.

Although this can be the most important part, it is often the most neglected. Many times, people don’t apologize because they think the offended party should be apologizing. (2)

When you apologize, you are taking responsibility for your part in the conflict. People are often afraid of apologizing first because they think by doing so, they will appear to be more at fault.

Delivering an apology even if you are only responsible for a small part of the conflict proves that you are competent enough to see your mistake and are strong enough to correct it. Plus, apologies strengthen relationships. It demonstrates honesty, trust, respect, and value.

4. Let them know that you realize you hurt them

Avoid adding assumptions about how the person is feeling. Saying something like, “I am sorry if I offended you” or “I am sorry if I upset you by what I said” implies that a problem occurred, but you don’t know what exactly went wrong. It sounds very vague.

By doing this, you are apologizing for your behavior. Apologize for your own peace of mind and move on, regardless of the other person’s actions. When you apologize, you are showing integrity, and it will help you also to forgive yourself.

Apologies with ifs and buts do not serve the purpose. Statements like, “I am sorry if I made you angry” or “I am sorry, but you were rude” imply that you don’t think you did something wrong. When you use ifs and buts in your apology, you are turning to apologize for blaming. In other words, you are saying that your actions are the other person’s fault.

It’s very irritating when the person apologizing becomes defensive. Buts and ifs in an apology are disrespectful and degrading. Make it clear what you are at fault for and accept responsibility for your shortcomings. 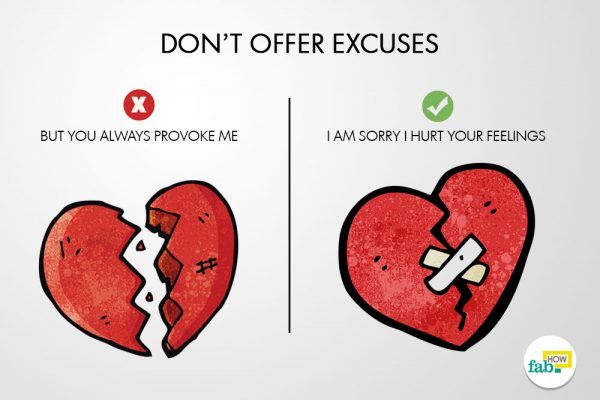 Keep your apology focused on what you did, how it made the other person feel and what you’re going to do differently in the future. Don’t try to make an excuse for your behavior or rationalize why it happened. If there is a valid reason that explains your behavior, it will likely come out during the apology discussion. But let the other person go there first, not you. 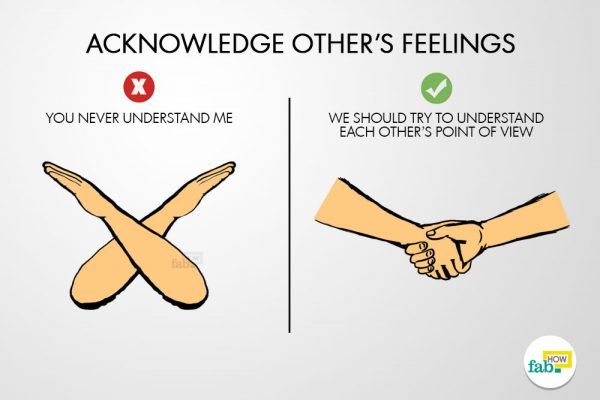 Once you have offered your apology, resist the urge to talk and just listen. Let the offended party vent their feelings, talk, complain, whine, or even yell. Simply acknowledge the person’s feelings by saying, “I understand you are upset. I know I was rude and I am sorry for it.”

Many times, due to the awkwardness and discomfort of apologizing, people tend to incessantly talk when actually they should be listening to the other person.

8. Express regret for what happened

Taking responsibility for your action is important, but letting the other person know that you regret or feel bad for hurting them will make it easier to resolve the conflict. Tell them how much you regret it and value their feelings. (1)

Express that you wish you could change what you said or did. You could say something like, “I should have been more careful with my words.” Any expression showing regret will add sincerity to the apology. Regret lets the other person know that you care about them and how they feel.

9. Promise that you won’t do it again 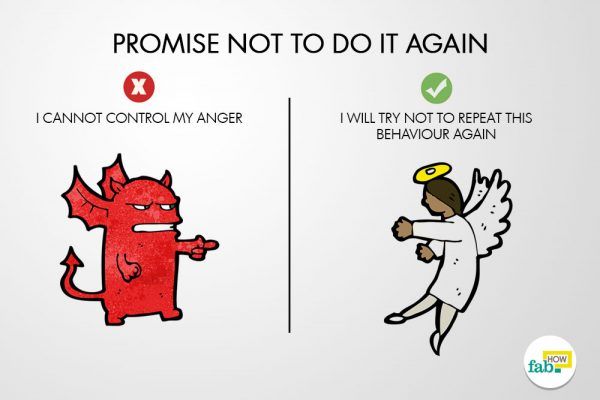 Give assurance that you won’t repeat the mistake or behavior. Here, you promise the person that you will change your behavior so that such mistakes don’t happen again in the future.

When you do this, it helps build trust and repair the relationship. You could say, “From now on, I am going to control my temper so that I don't snap at you. And the next time I do it, I want you to reprimand me for it.” Make sure to honor your commitments. If you say you will control your temper and do nothing about it, people will question your integrity and trustworthiness.

11. Let them know how you plan to mend the situation 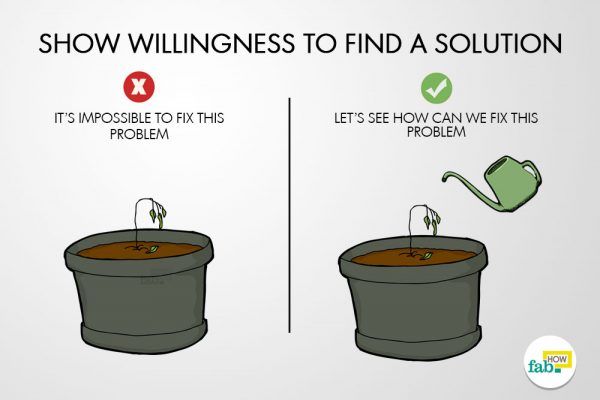 One of the most important aspects of a sincere apology is your willingness to find a solution to the issue. Sometimes it’s not possible to do that. But whenever it’s possible, do everything you can to make it right.

Ask yourself “How can I fix this problem? How can I prevent this mistake from happening again? Now that it’s been committed, what can I do about it?” When apologizing, offer an appropriate action. Make it clear as to what steps you will take to make sure not to repeat the mistake.

For example, “I am sorry I broke your phone. I will get it repaired tomorrow.” Choosing to act on your mistake is evidence that you are genuinely sorry for it. As much as possible, try to mend the situation. If it is your behavior that caused a conflict, try to change your behavior. 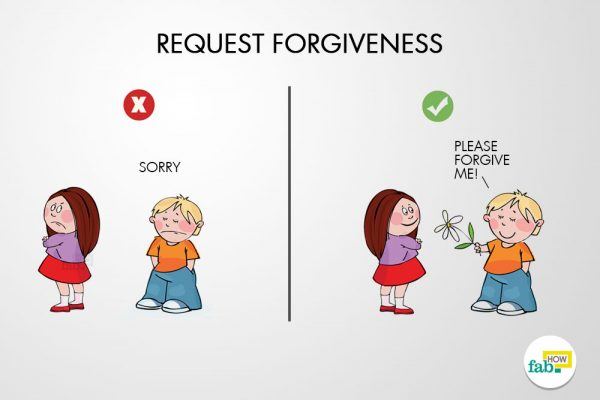 You need to ask for forgiveness rather than assuming you will be forgiven. You could say, “I’m so sorry I reacted rudely. I know I hurt you. Will you please forgive me?” If it’s something that caused a deep hurt, you can say, “I understand if you need time to think about it.”

It’s not always necessary that the other person grants you forgiveness instantly (1). Give them time to think about it, to cool down or heal from the hurt. Don't rush them through the process. For instance, once you offer the apology, you could say, “I understand how you feel. I know you might not be ready to forgive me. Take your time to see that I am changing my behavior.”

How to Get Rid of a Headache the Natural Way