Self-control is the ability to control one’s emotions and desires. Everyone possesses self-control, but often in a constant battle with basic urges, you find that your self-control buckles mainly when difficult situations arise. People usually blame their faulty self-control for the imperfect choices in their lives. Sometimes we blame the influences of others for our lack of self-control.

More than 1 in 4 people (27%) say that lack of willpower is the most significant barrier to change, according to a survey conducted by the American Psychological Association. (1)

Whether your goal is to read more books, take the stairs instead of the elevator, avoid unhealthy choices like drugs and alcohol, eat right, exercise regularly or save and spend wisely, self-control is a critical step to achieve the outcome you desire. Only through persistence and perseverance will you be able to overcome the obstacles that block your ability to exercise self-control.

When used wisely, self-control becomes an effective tool for self-improvement. It is not a skill you are born with. It is something that needs practice to master. Having a plan of action is always a good idea. Always stick to your plan and make changes where needed. Every new year brings about resolutions to make a change. Exercising self-control will be essential to your success.

Here’s a roundup of some useful techniques to help you boost your self-control. Can you think of others to add to this list? Personalize it based on your attitude and personality. 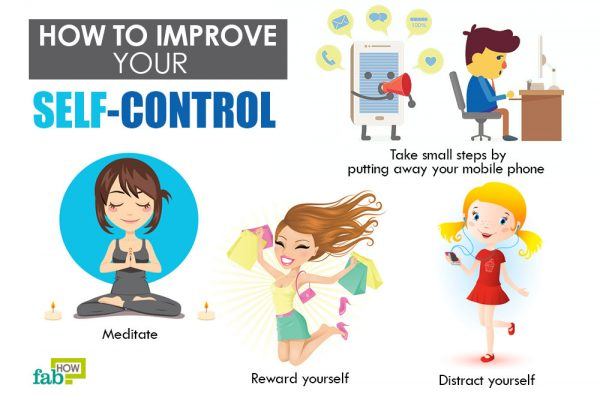 How to Deseed a Pomegranate in less than 30 Seconds

How to Use Turmeric for Acne, Wrinkles, Skin Lightening and More