Essentially, the battle between swag and class has nothing to do with a person’s character. Being a gentleman is not defined by your choice of clothing. It is your mannerisms that make all the difference. Yet, being stylish hurts no one.

The charm of a suave look is essentially derived from a tuxedo, which can complement your looks provided you know how to tie a bow tie. Bow ties have exuded class and sophistication since they came into existence.

Its origin goes way back to the 1700s, when Croatian mercenaries wore cravats to bind their shirt collars. Later, the French aristocracy adopted it, and years of evolution turned it into the necktie and bow tie of today.

Yes, pre-tied bow ties and clip-ons are available in the market, but their perfect knots and symmetry undermine the sophisticated look that you intend to achieve. Unlike a clip-on or a pre-tied bow, the slight crookedness of the knot and the lack of symmetry is the true nature of a hand-tied bow tie, which makes it even classier. To avoid a major fashion faux pas, here's how to tie a bow tie yourself in 40 seconds.

Step 1. Place the bow tie around your collar and tie an overhand knot

Go stand in front of a mirror if you want to do this right. Start by buttoning the collar and unfolding it. Now, place the tie around your collars that one end of the tie is 1½ inches longer than the other.

Now, pull it tight under your neck like a basic overhand knot. Make sure that the knot is directly over the collar button and is tight enough to stay in place. Place the longer end of the bow tie over your shoulder. You won’t need it for the next step.

Step 2. Make a half-bow from the short end and bring back the long end

Place your index and middle fingers on the top and back sides of the bow tie, respectively.

Use your middle finger to fold the bow from the back on top of your index finger and make a half bow. Hold the half bow over the neck horizontally.

Keep holding the half bow with your non-dominant hand, and bring down the long end of the bow tie that was on your shoulder over the top of the half bow.

For a Twisted Knot

If you like a twisted knot in your bow tie, just make a small change. Rotate the longer end once while bringing it down. It will form a twist in the fabric in front of the half bow.

Step 3. Put your thumb in the opening behind the half bow

Fold the bow pull it forward to make a small opening behind the half bow. The opening is below the long end of the bow tie and above the overhand knot at the origin of the short end or the half bow.

Stick your thumb into that opening and fold the bow the other way.

Step 4. Make another half bow from the long end and stuff it in the opening

Make an additional half bow with the long end by folding it into a bow using your index and middle fingers.

Pull the opposite ends of first and second loops to adjust the tightness of the knot. Initially the bow tie may look odd. It requires a little bit of adjustment before you have the final look.

For a Big Knot 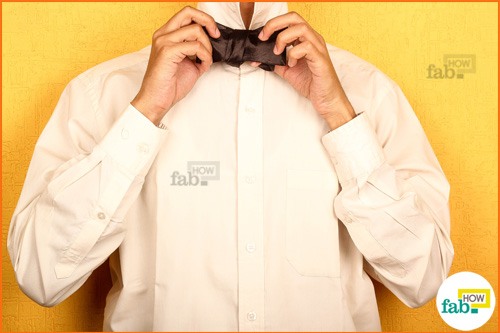 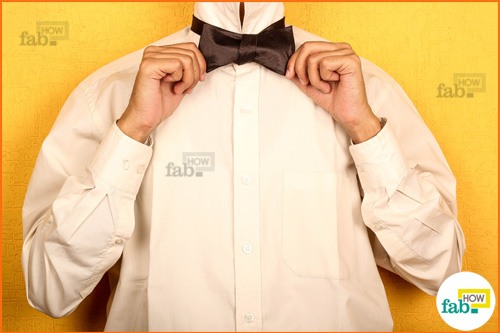 If you like a big, wide knot at the front, just keep things loose. While inserting the second half bow behind the first half bow, do not push in tightly. While adjusting, just pull enough of the opposite sides to get the shape of the bow, and not tighten the knot.

Now, fold your collar down and enjoy the suave look of a bow tie.

Step 1. Place the bow tie around your collar and tie an overhand knot

To avoid any mistakes, stand in front of a mirror. Now, fasten your collar button, unfold the collar and place the bow tie around it. Remember, one end of the tie should be1½ inches longer than the other.

Place the longer end over your shoulder. You won’t need it for the next step.

Step 2. Make a half-bow from the shorter side

Place your index and middle finger on the front and rear portions of the bow, respectively. Use your middle finger to fold the bow from the rear to the front side and make a loop or half bow. Pin down the half bow over the neck in a horizontal position.

While holding the half bow, bring down the longer part of the bow tie over the top of the half bow.

Step 3. Make a loop in front by the long side

Step 4. Make half-bow from the long end and insert it in the loop

Make a second half-bow from the longer end by folding it into a bow.

Insert the finger of your non-dominant hand in the loop at the front. Now, insert the second half bow in front of the first half bow through this loop.

First insert the point of fold of the second half bow.

To adjust the symmetry and structure of the knot, pull the bow tie from the opposite ends of the first and second loops.

After a few seconds of adjustment, the proper shape of the bow tie will be visible to you. Don’t fret over the symmetry. Askew bow ties are perfect and give you a debonair look.

Now, lower your collar and see for yourself the elegant look of a bow tie.